A Year in Review

A Year in Review

Improved Occupant Health & Safety, Energy savings and a reduction in GHG emissions post pandemic and a a better performing building into the future, an interview with Tim Cresswell, CEO, TCI. 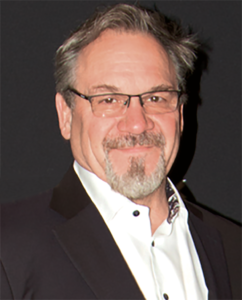 So, when the pandemic hit back in March of 2020, a variety of authorities like The Science Table and ASHRAE providing recommendations on how to combat the COVID Virus. We originally thought it was on surfaces, and then they soon realized that it was in an aerosolized form, which meant we needed to provide more airflow or ventilation and improve filtration in buildings. 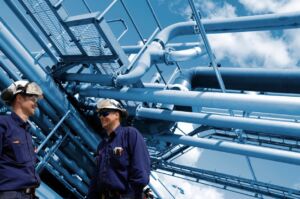 Many building owners did the obvious, hiring a reputable firm to check their mechanical systems, rooftop systems, check dampers, check coils, clean edge, tighten belts, all those good things, they check the percentage of mixed air and outdoor air, for example if you have a 10,000 CFM unit, and you decide to use 1000 CFM for mixed air and 2000 from outside air and mix that, you’ll have to heat that that 2000 CFM that’s entering the building and discharging into the space. So that was the ideal method. So, one thing we didn’t know, and most firms don’t know is that there’s a high percentage of air loss as well as duct leakage. In other words, that 2000 CFM of outside air, that you think is hitting the space is being lost, a percentage of that is being lost above the ceiling, you know, if you have T-bar ceilings, so in essence, you’re not getting that amount of fresh air into the desired space, creating losses between 15% to 35%. Nobody knew and nobody accounted for that. And that’s where the Cleaner Air for Schools program come in, in terms of a rehabilitation, optimization, and sealing of the ductwork to mitigate air loss in the air duct system.

Identify the Problem – Get the Facts 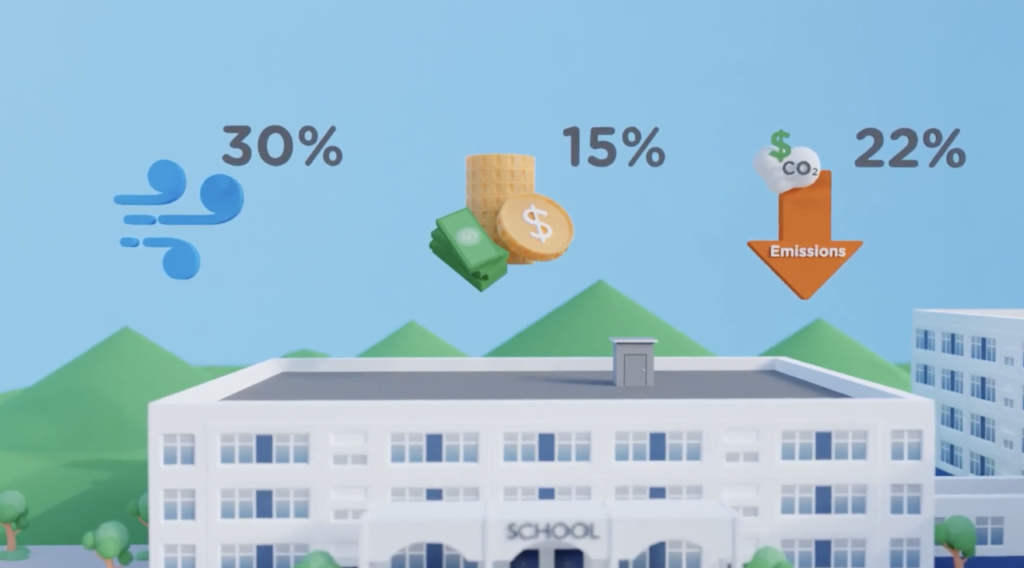 One thing we learned was how crucial it is to capture data, I mean granular data to help guide the decision process. So, our process is a four-stage process, the first thing we do is get the data and here’s the deeper dive that the conventional process doesn’t attach to. We check the belts, the dampers, filtration, check coils, measure air volume at the diffuser level, etc. Check, where the problem is somewhere between the rooftop system and the air register in the space. All of that ductwork has losses, crushed ductwork, dislodged ductwork, holes and ductwork, joints that don’t fit properly and the list goes on. So, our work is going into investigate, what is the amount of airflow coming from that rooftop system entering the ductwork. So, we’re not interested in the design values of it, but how much air is actually entering the ductwork and how much air is discharging? At the register at the diffuser level. And, and that math equation tells us the percentage of air loss between the rooftop and the diffuser. That’s the problem. first stage, second stage now that we’ve isolated the problems now, the other part of the equation here is what are the air exchanges per hour being experienced in the individual spaces? So for example, in schools, they require four air changes per hour (ACH), well, that means we’re solving to two issues, either we’re solving to drive more air to reach the ACH standard in the case of under ventilated classrooms, or if we’re over ventilating, we can harvest energy since we don’t need to over ventilate, we can save on energy dollars and carbon tax. So we want to be able to turn back motor speeds to meet the four ACH standard and harvest all of the energy in the carbon tax savings we can. That’s Good Business, Smart Business. 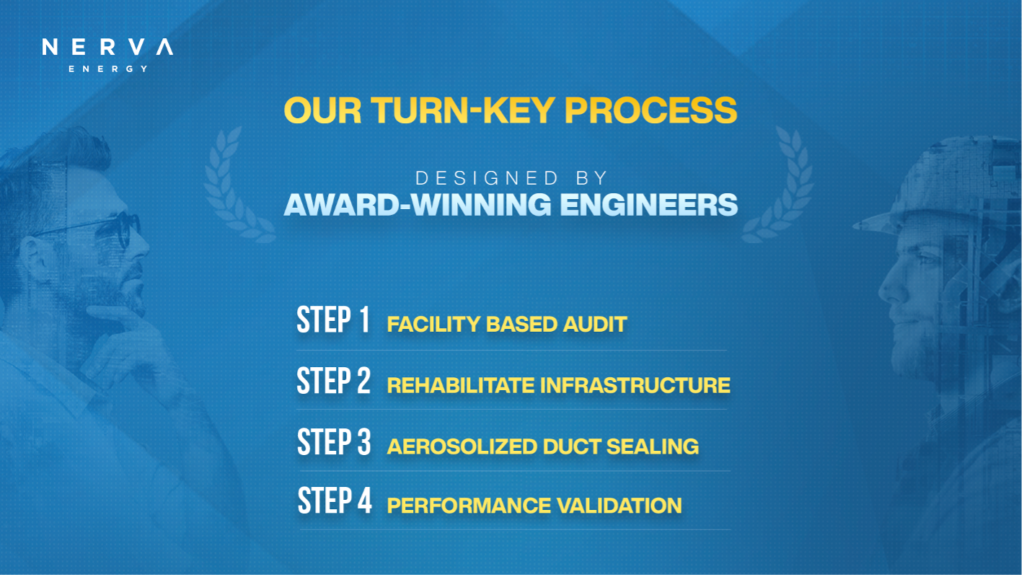 Air changes per hour, which is often abbreviated as ACH, is a calculation of how many times per hour the entire volume of air in a given space is replaced with supply and/or recirculated air. It is also sometimes referred to as “air change rate” or “air exchange rate.” ASRAE recommends four air exchanges per hour. 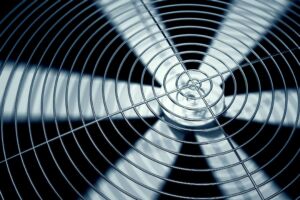 Yeah, so I’ll explain that in the process here. Step one is to do an air audit which will identify how much air each air diffuser is delivering. So step two we rehabilitate the ductwork and repair any major holes, repair dislodged or crushed ductwork. Once it’s in a state of a good state of repair we perform the third step which is the duct sealant which is an aerosolized substance that gets sprayed into the duct system from the inside of the air duct. And it really gets sucked into anywhere where there’s a hole, the size of a hair follicle, or five eighths of an inch, forms a scab over the hole. So we’re not sealing the entire ductwork, it’s only where there’s holes. And we have a computerized program that tells us before we seal the percentage of air loss in this duct system, and it tells us the post measurement of the percentage of air loss post seal. So in other words, we never seal to 100% tight, we always leave it leave 2% for other reasons. This gives us the confidence at that point that the job is performed properly and it’s meeting expectation. And then the fourth step is taking a look or going back and doing air measurements at the air handling level as established in the step 1 initial air audit. This will inform us as to the amount of additional air being driven into the space. So let’s say we started out with a 10,000 CFM unit. And we found that we’re getting 7000 of CFM. In the space pre. Now we seal, we re-measure and we find we’re getting 9,500 CFM in the space, that’s a pickup of 2,500 CFM. We then translate that to an air exchange to see well what’s the air exchange is now in that individual space? If they’re not meeting, the standard four ACH we can increase airflow to meet the standard four ACH. But now if we’re over ventilating, and we’re at a five ACH, then our recommendation would be is to attach variable frequency drives, turning the motor speed back to four ACH, and then claim all the energy savings associated with that over ventilation. 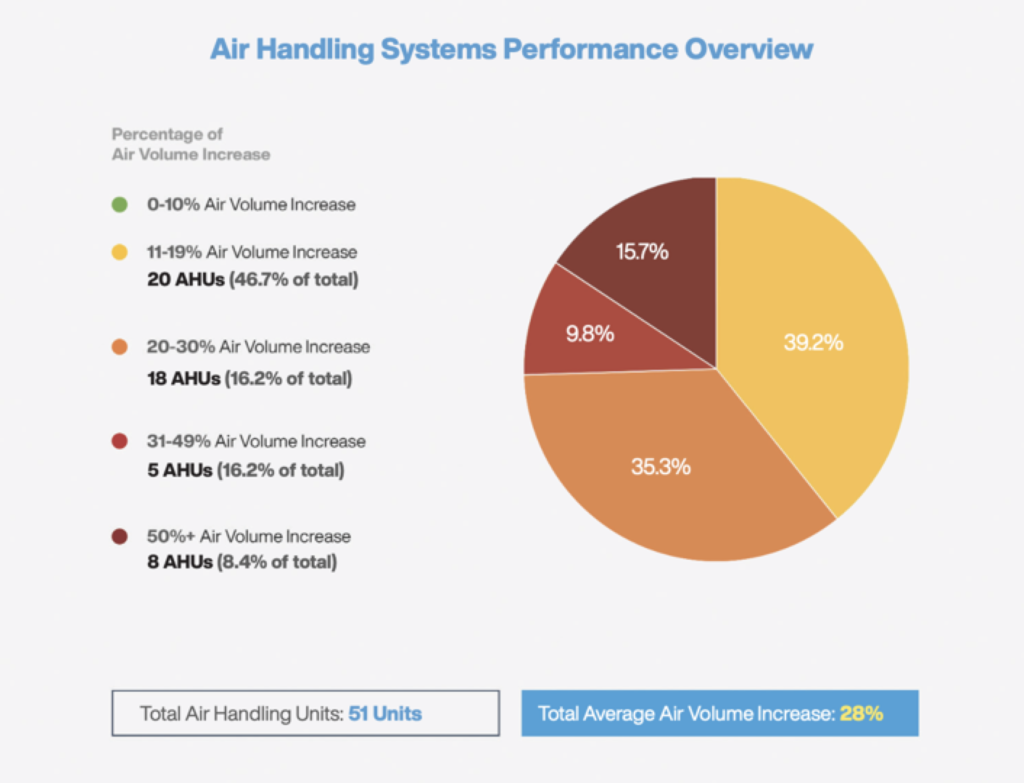 On over ventilated space most of the pattern has been for has been somewhere in the order of between 10 to 15% of the total energy bill annually? In under ventilated spaces we have seen an average airflow increase ranging from 20% to 40% in both new and existing older buildings. One thing we’ve learned for sure is that all ductwork leaks. 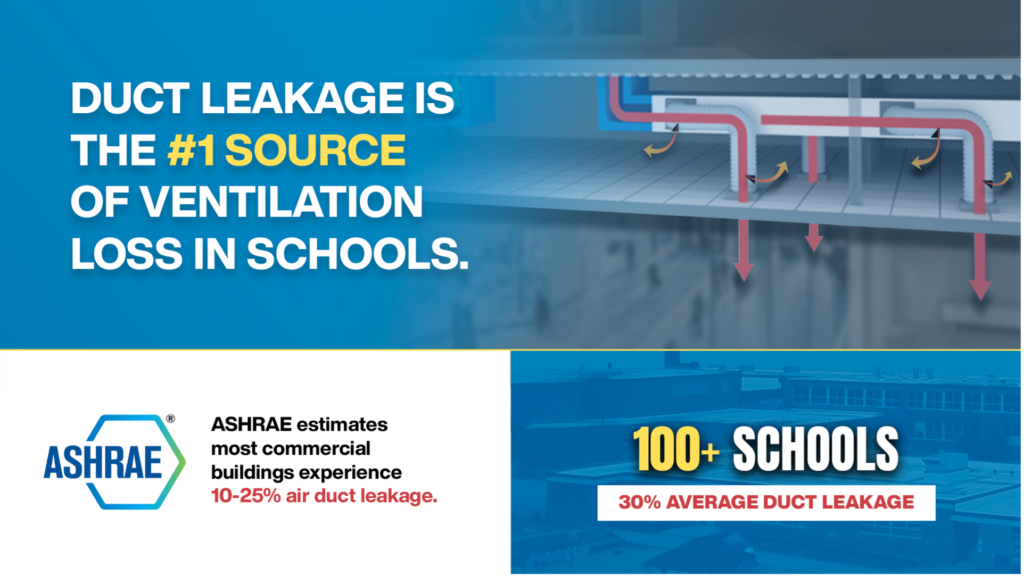 Resilient ventilation is the key to future proofing your buildings. One thing this pandemic has taught us is that our ventilation systems aren’t that resilient. Clients that implement a full program with Nerva now have a robust ventilation report on for each facility air handler and related ACH airflow, plus every air diffuser that feeds off of that individual air handler. Should we get challenged with another virus we are in a position to examine where airflow can be increased and by how much airflow in a moment’s notice. The process would be fast and inexpensive to implement to protect the health and safety of occupants. 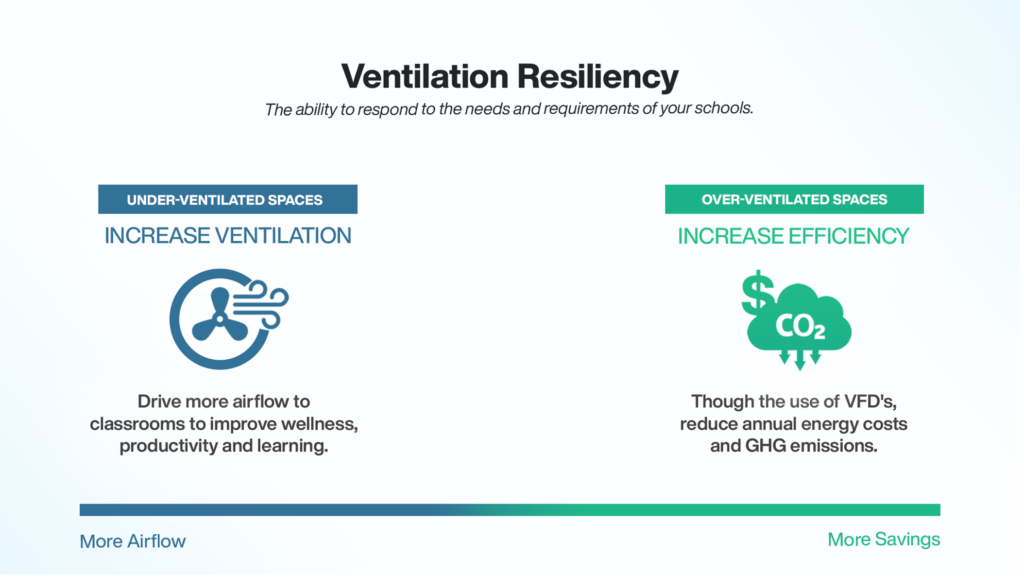 What this means to students and staff

This is all about keeping people safe, healthy and their wellness. That’s priority one for any occupant in a building and it’s our duty as building owners and custodians of that. We have to ensure especially in schools that parents have your trust that their children are in the safest environment possible. 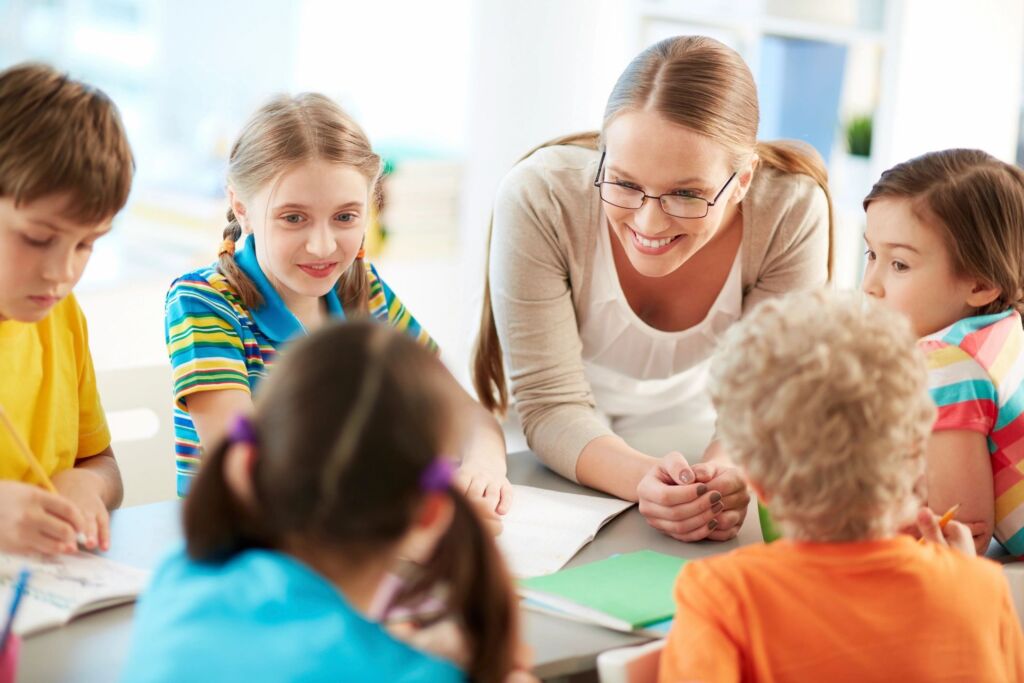